There is No Step Three

The last computer I bought and the one that I am typing on now was introduced in April 2010 according to MacTracker. I typically try to hold on to my current computers for about three years, so it is getting close to upgrade time. This machine is a 2.4GHz Core 2 Duo 13” MacBook Pro. This was the computer I wanted when it came out. Well, kind of.

I remember wanting to upgrade when the next round of laptops was announced. I had been eyeing the 13” MacBook Pro for it’s size and power. Hoping that the new crop would contain new processors, I eagerly refreshed the live blogs. To my disappointment, it was clear the 13” would not get the new Intel Core i5 or Core i7 chips. The 13” got stuck with the old Core 2 Duo. Well, this didn’t stop me. I needed a new computer and put in my order.

Now we are 2 and a half years later and the upgrade itch has started again. This time around I was thinking more than just updating my computer as the monitor I currently use was introduced back in January of 2003. It is a 20” Apple Cinema Display. So I started looking at monitors too.

For a while I was convinced that my next computer would be a MacBook Air. If they had come out with Retina Airs, I might be typing on one of those now. But, sadly, they didn’t. So I started thinking about other available laptops. I could get an Air with a Thunderbolt display or a Retina MacBook Pro with a Dell 27” display or maybe just a Retina 15” with no display.

I started thinking about my computer usage patterns. I had originally wanted a laptop so I could take it anywhere. Well, as it turns out, it mostly stays in one spot on my desk. And when I do take it somewhere, it is hard to work on because the screen is so small. At my day job, I have a 15” MacBook Pro and a 27” Apple display. All that real estate will spoil you. Then I saw it, the new iMac. 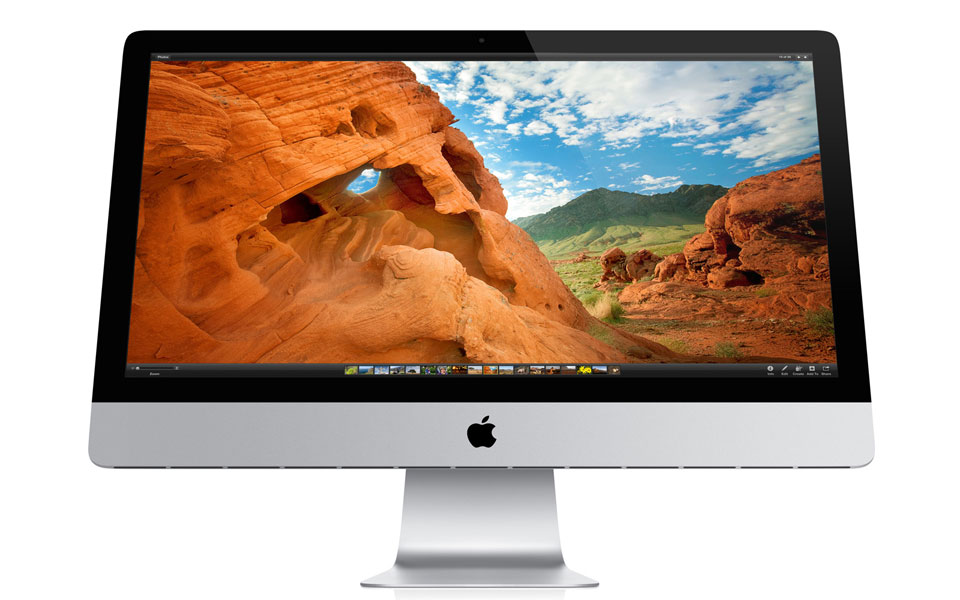 I remember seeing it during the keynote at that tricky angle where it looks just 5mm thin. That is a good trick. And it works. The new iMacs look like flat panels from most angles. What I am getting at is that this is one fine looking computer.

I had never really considered an iMac as a home computer before. I went straight from desktop towers to laptops. What attracted me to the new iMac was the large screen, 4 RAM slots and the Fusion drive. It didn’t really bother me that it would always be sitting on my desk, because that is what my computer does now. I also like the compact nature of the machine. I am coming from a setup where cords are strewn about and the display requires an ADC to DVI adapter that is as large as a Buick. The iMac has one cord. There is no step three. These days there isn’t even a step two.

So that is how I went from Power Mac G4 towers to Powerbooks to MacBook Pros and now to the consumer friendly iMac.

I don’t remember the exact year that I read Zeldman’s classic Designing with Web Standards, but I do remember how much it motivated and inspired me. Up until that point it seemed the web design world was set, tables for layout and CSS for typography. Considering using CSS for all presentation purposes was a revelation. Marking up web pages semantically so they could be read correctly unstyled seemed like a pretty novel idea. So I went forth and did my darnedest to do exactly what the book instructed, design with web standards.

It has been a few years since that book was published and now it seems like using tables for layout is a distant memory. You can almost liken the current state of CSS3 to the use of web standards back in the day. There are some aspects of it ready for use now, but don’t expect those results to display correctly in all browsers. I suppose the one constant between then and now is that Internet Explorer continues to haunt us. Signs do point to that changing though.

So it is on this day that we celebrate all that has been accomplished through the evangelizing of web standards by virtually donning the blue beanie to show our support. Thanks Jeffrey.

Conan's Back on Basic Cable

My decision to cut cable tv wasn’t exactly a hard one. Most of the shows I cared about were either available online or over-the-air. It wasn’t until recently I got a slight twinge of regret. That was when Conan moved his new show to TBS.

Luckily, teamcoco.com has come to the rescue and is posting new episodes the day after they air. Crisis averted. Watch now »